The Little Nun of San Bruno 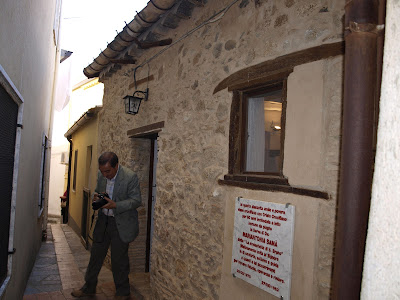 An only daughter, Mariantonia Samà is born a few months after the death of her father Bruno in a dark, small and miserable dwelling, where the sun never shines, hidden in an alley barely five feet wide. Her mother is poor, as is the majority of the Calabrian population in the wretched years following the Italian Unification of 1861.

Mariantonia grows up very close to her mother who has to do everything possible to secure food for both of them. Mother and daughter are illiterate and speak only the local dialect of Sant’Andrea, an ancient language spoken by residents of this quaint, sleepy hill town that overlooks the Ionian Sea.

Mariantonia and her mother walk bare feet in summer and in winter, in the countryside and up the mountains, through the town and inside the church, as it is common for the majority of the population of Sant’Andrea. Their clothing is also poor and minimal, especially in the rigid winters at the end of the 19th century, when the weather is so severe that wolfs, from nearby mountains, wonder into the town in search of food.

One morning Mariantonia, now approximately 11 years old, follows the mother and other family members to the river Saluro, to do laundry by a water mill. On her way home, in a section of the countryside called Briga, Mariantonia is thirsty and, as is customary, she bends over to drink from a water puddle. When she arrives home she is shrunk and immobile for about a month. During this time she also babbles disconnected things, twists and shakes and, strangely, she never eats until past midnight. For the people around her there are no doubts: she has ingested evil spirits while drinking and she is possessed.
Praying, begging, imploring, and trying to expel evil spirits do not help the wretched child to get over her state. And so, after six years spent mostly in bed, a noble resident of Sant’Andrea, the Baroness Enrichetta Scoppa, intervenes to help Mariantonia. The Baroness organizes an expedition to the Carthusian Monastery of Serra San Bruno in order to exorcise the poor girl.
Since the beginning of the sixteen century, when the remains of San Bruno were found, a cult has been spreading through Calabria who believes the Saint to have healing powers over obsessed and possessed persons. Public exorcisms, with long involved rites and ceremonies, usually take place the first Monday and Tuesday after Whit in the town of Serra, near the Carthusian Monastery of San Bruno. The rituals are performed inside a small pond in the middle of which there is a statues of the praying Saint. 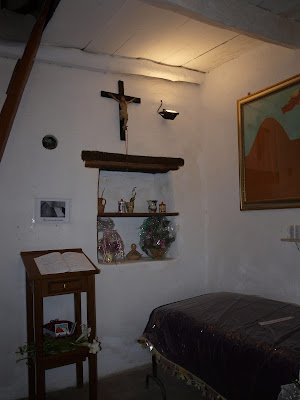 Recently, in the archives of the Carthusian Monastery of Serra (file number XXVI), they found 15 pages handwritten narrative dated 1904. The anonimous monk writes that in the month of June, approximately in the year 1894, at the time when don Pio Assandro is the Prior of the Carthusian Monastery, Mariantonia travels for eight long hours from Sant’Andrea to Serra through a arduous mountain path. With her is her mother and four carriers who transport a wooden box in which, because of her often-violent convulsions, lays Mariantonia. The four transporters are identified as Antonio Mannello, Vincenzo and Giuseppe Lombardo and Antonio Frustaci.
During the trip the wooden box is opened to see if Mariantonia needs anything, but she declines everything and she becomes more and more agitated as they approach the destination.
The group transporting the sick girl arrives at Serra before noon: on the way many people, moved by the spectacle, follows the procession to the Carthusian Monastery. Once there they stop by the main gate and the rite of exorcism begins in Latin, performed by the chief priest of Amàroni who is presently visiting the Carthusian monks. The crowd of locals joins in prayer, but nothing happens! 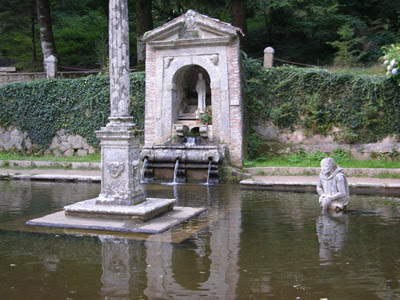 In the meanwhile, the Prior of the Carthusian Monastery who is temporarily away returns and joins the crowd and other monks for a five hours prayer session; but to no avail. At the conclusion of this prayer the Prior orders a servant to get the silver bust reliquary always kept on top of the main altar of the Monastery Chapel. This reliquary contains the cranium and the bones of Saint Bruno of Cologne. He is none other then the founder of the Carthusian Monks. He died here in Serra, in Calabria, where he had retired and where he had founded his second monastery after the one built in Chartreuse, near Grenoble in France.
On this day, for the purpose of the exorcism, the bust is placed on the remains of Count Ruggero’s Tower outside the Monastery. Here is where the miracle happens. Mariantonia sees the statue of Saint Bruno smiling at her. She gets up by herself, she hugs the statue and she yells:  “San Bruno has answered my prayers!” And so she finds herself healed. There is great exultation from everyone.  The wooden box that served to carry Mariantonia and all her clothing are burned on the side of the Monastery’s wall. As is the custom after an exorcism, Mariantonia returns to Sant’Andrea through the road that leads from Serra to Soverato, this signifies abandoning the old way for the new.

But this is only the beginning of Mariantonia’s story. Life in town is very harsh and Mariantonia’s health is very fragile. After some time, perhaps victim to arthritis, she confines herself to bed, lying on her back, with bent knees raised like a small hillside. Totally immobile, with only the use of her hands to say the Holy Rosary and to eat, Mariantonia remains bedridden in this position for… sixty years, until her death in 1953.
Let’s try to recline in bed, let’s bend our legs and raise our knees and let’s imagine staying in this position for sixty years! Surely our heart would plunge in the darkest depression. That is not what happens to Mariantonia, who at age 34 also loses her mother. Yet Mariantonia is never alone. The people of Sant’Andrea come to her help and there is always a woman ready to care for her day and night. On a daily bases men, women and children visit her and bring her fresh bread, cooked meals, light food, fruits, vegetable, soft cheeses, oil, and anything that helps sustain Mariantonia and nourishes her in her immobility without adding to her pain and her intestinal problems. Perhaps because of her modesty she never wants any doctor to visit her most painful areas. Furthermore, Mariantonia donates the sometimes abundant supply of food contributions to other needy citizens, keeping for herself only what she requires for the day saying: “ God will take care of me tomorrow!”  She always refuses money.

On the wall facing her bed hangs a crucifix to whom she always conforms accepting her distress and sufferance and she invokes Christ calling him” That beautiful Jesus!” using a dialect expression of great affection usually reserved for the most beloved and closest people, an expression that could also be translated to say “Dear, dear Jesus!” 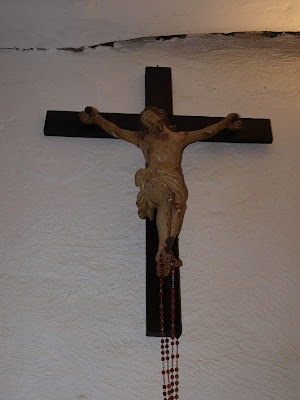 She receives Holy Communion every day and three times a day (morning, noon and night) her dark dwelling echoes with the beautiful sound of the Holy Rosary recited in Latin by visitors.

Innumerable people come to her to express their worries and have their prayers answered: “What happened to my son at war? Why doesn’t he write?”, “Is it good for my family to leave for America?”, “Should my daughter get engaged to so and so...?”, “My sister is gravely ill. Will she get better?” Mariantonia gives courage and hope to everyone that comes to her for advice and often people find their prayers answered by her feeble and sweet voice.

The Sisters of the Sacred Heart, to whom Baroness Scoppa willed her palazzo in Sant’Andrea, elect her “sister” and bestow on her special reverence. For that reason Mariantonia’s head is covered with the black veil of their religious order and she becomes known as the Little Sister of San Bruno. The Sisters take care of her regularly, bathing and combing her. 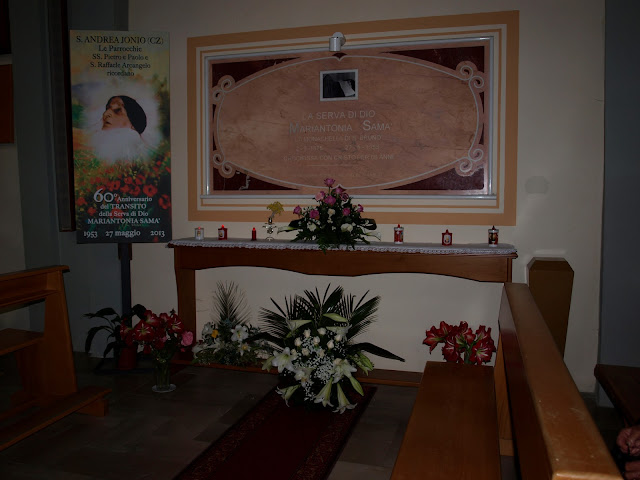 Mariantonia dies peacefully in the morning of May 27th, 1953, at the age of 78 while three local women are at her bedside reciting litanies to the Holy Mother. She has no bedsores and her skin is smooth and unblemished. Wearing a white linen dress, she is carried in a procession through the streets of the town in an open casket and the town’s folks revere her as a Saint.

In 2003, fifty years after her death, Mariantonia’s remains are moved from the Chapel of the Sacred Heart Sisters in the local cemetery to a special tomb inside the main church of Sant’Andrea. A very short distance from the church is Mariantonia’s home. After many years of being abandoned it is now restored and it is visited by many people who come here to pray.

The number of testimony for favours received and prayers answered, and the faithful, who attest to her sanctity in Italy and the Americas, are impressive. Today, as when she was alive, the Little Nun doesn’t conjure feelings of fear; on the contrary, people turn to her like they would to a beloved family member who listens, understands, consoles and gives encouragement. There are many revealing signs of her presence amongst us: the healing of souls, unexplained sightings, the sudden fragrance of roses and jasmine, the help with difficult situations, miraculous healings.

In the realm of Christian sainthood, Mariantonia’s life is a rare case if we consider the sixty uninterrupted years of totally immobile existence. The Little Nun could not but utter few dialect words, pray and stare in ecstasy at the crucifix confirming that faith and love are capable of transforming otherwise desperate human conditions into unfailing sources of grace and consolation.

In 2007 Monsignor Antonio Ciliberti, Archbishop of Catanzaro-Squillace, officially opened diocesan inquiry for the canonization of the Little Nun, assembling the proper ecclesiastic process that has a vast documentation of testimonies of her heroic virtues and of favours received by the faithfuls.

Lord Jesus, who wanted to call your servant Mariantonia to follow you closely on your path to the cross by remaining bedridden for 60 years, allow me to love you also through the difficulties of my own life.
I humbly beg you to bestow glory on your servant Mariantonia and to grant me, through her intercession, the favour I need (mention request...). Amen.
Pater, Ave, Gloria.

Anyone who believes to have received a favour from praying to, and through the intercession of the Monachella, is asked to notify the pastor of the church in Sant’Andrea as indicated:
Parroco dei Santi Apostoli Pietro e Paolo,
88066 Sant’Andrea Jonio, CZ, Italy
Tel. + 39- 0967 - 44219. 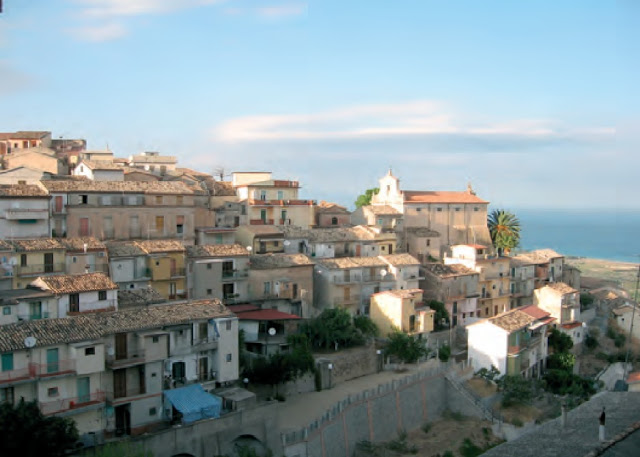 ant’Andrea Ionio, abbreviated name for the town of Sant’Andrea Apostolo dello Jonio, is in Calabria, in the province of Catanzaro, 8 km south of Soverato on Interstate 116. From the Marina your drive 4 km up the hill to the historical center of town, all the while, at every turn of the road, enjoying magnificent views of the sea.
At the end of Piazza Castello, the main square of the town is the church where, on the right wall, you will find the tomb of the Monachella. The Monachella’s house is in an alleyway directly in front of the church, off of via Cassiodoro and it can be visited any day. 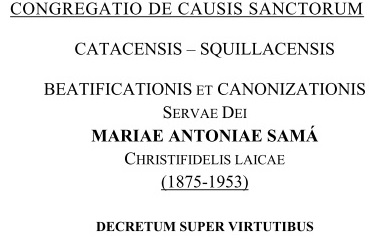